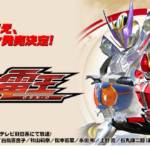 Just in time for the series’ 10th Anniversary, Kamen Rider Den-O is being released in high-definition!

The adventures of the time-traveling Imagin will be released in three special sets:

Each Box will also include a variety of special features, including the Imagin Anime and the Hyper Battle DVD. These Blu-Ray sets are priced at 19,800 Yen each!