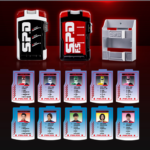 P-Bandai’s finally opened up pre-orders for the Super Sentai Artisan SP License set, and of course, we now have production photos and release info to go along with that.

Included in this set is both the standard SP License and the Fire Squad version. In addition to that, the set will also include changeable cards representing each of the Rangers and a clip-on holster.

All of this will cost a hefty 17,712  yen for the set, but there will be an option to buy the two separately for 9,936 yen a piece. Either way, we’re looking at an October release window for the Super Sentai Artisan SP License.