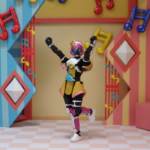 This week’s update on Bandai’s candy toy blog has revealed that Kamen Rider Poppy will be joining the popular SODO Kamen Rider Ex-Aid line! The blog post features multiple images of the figure, comparing it with SODO Ex-Aid showing off its articulation and flexible skirt as well as optional red eye stickers to recreate when Poppy was under Bugster control. A unique stand will also be included to accommodate the figure’s different height/build.

Though originally planned for Stage 8, Kamen Rider Poppy will be released as part of the Stage 9 wave in mid-July!