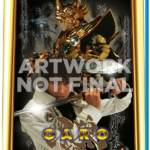 Some time ago, it was reported that Kraken Releasing had licensed the first season of GARO for release in North America.

Now at last, we have some new details on this project!

A prototype of the collection cover has also been released, although the art is subject to change.

Stay tuned to TokuNation as we keep you up to date on all GARO news!