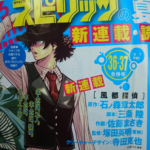 Following up on the reported return of fan-favorite series Kamen Rider W, we now have some additional details on this revival project!

A new manga series, titled Kamen Rider W: Futo Detectives has officially been announced! Series head writer Riku Sanjo will be in charge of the story, while designer Katsuya Terada will return once again to develop even more strange creatures for W to fight. Artwork will be provided by longtime anime veteran Masaki Sato.

The first issue of Futo Detectives is currently scheduled for release on August 7 2017! Be sure to join in our Ongoing Discussion Thread to share your thoughts and fears about this new manga!