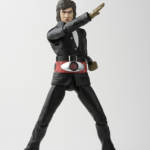 After being teased in various magazines toy shows, the Granddaddy of all Kamen Riders is finally going to be released in the S.H.Figuarts line!

Coming in the December batch of Tamashii Pick-Ups, we have S.H.Figuarts Shinkocchou Seihou Kamen Rider 1 joined by his human identity: S.H.Figuarts Takeshi Hongo, rendered in a close likeness to actor Hiroshi Fujioka. Apparently, both will be mass retail releases with only Rider 1 having a known price of 6480 yen, the price on Takeshi Hongo and any included accessories are currently not known as of this writing.