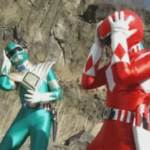 I had the extreme pleasure of attending San Diego Comic Con 2017. This was my fourth year attending and covering the event for our network and every year by the time you go home you’re left dizzy from everything you’ve just experienced. As the sole representative of TokuNation.com my primary focus is to cover all things tokusatsu related, or in the case of American entertainment, that means Power Rangers.

San Diego Comic Con is the largest pop culture convention in the entire world. The number of attendees ranges upwards of 100,000 guests and anyone who has attended the convention will tell you that is no “generous number” … it’s a reality. And this year whispers are it was the largest convention ever. Literally every major entertainment company, regardless of whether or not they have their own convention earlier or later, brings their A game because this is the one time a year that the entire world is watching in anticipation for what you have to show.

This year the Power Rangers brand failed to not only to capture any of the magic or attention they might have acquired from their major motion picture release earlier this year, they failed to show up at all. Please click “Read More” for our in-depth analysis of why this wasn’t just one of the worst years for Power Rangers at San Diego Comic Con but why it may be the worst ever.

The show started off with a fizzle when approaching Bandai’s booth. The items on display were items already shown off at Toy Fair 2017 or prior. The only Power Rangers Ninja Steel item on display was the Lion Fire Megazord along with a 5″ Gold Ranger figure. The Zeo Legacy figures were on hand, but the Dino Thunder Legacy figures (shipping with the Zeo waves) were not on hand (meaning they will release prior to being shown in public, ever). The entire Bandai booth was created for interactive “morphing” with Mighty Morphin Power Rangers, or a Dragon Ball Super interactive “power up” station. If you wanted to see the toys (on Preview Night) good luck – they wrapped the line around the display so you couldn’t get a close-up look of the toys (they would remedy this come Thursday).

If you had questions about the line most of the actual Bandai employees hid inside the sales portion of their booth or were not present as they hired an entire crew of local volunteers to run the interactive booth. Not that you would have any questions because everything on display was already shown at a prior show and covered in-depth (by us no less).

The Power Rangers Toys & Collectibles Power Hour was fun and had the potential to save the show for Power Rangers fans but it also felt like a haphazardly put-together panel of individuals who didn’t feel comfortable on stage. The Imaginext representative looked like he had stage-fright and no idea what to talk about, and more than once was guided along his own presentation by Jason Bischoff (Global Licensing for Saban Brands). Pop Culture Shock Toys had a great presentation if you enjoy statues and busts, and Legacy Wars had a fun presentation if you’re still playing the game. By the time we got to Bandai’s reveals, most of our live-feed (we live-streamed the panel on Twitter) was frustrated that it took 30 minutes to get to what they wanted to see, and they expressed their frustration as more Mighty Morphin Legacy toys were announced (specifically the non-combinable Legacy Zords). Notice to Bandai and Saban Brands – the fans and collectors we’ve spoken with do NOT want those items if they’re simply large versions of the original zords. This is now dangerously close to creating an over-saturation if it’s not already to that point. If not for Jason Bischoff leading the panel reveals it very well could have been a disaster. On a side-note, kudos to Jason for being one of if not the only approachable Power Rangers involved individual during this entire show.

The 6.5″ Legacy figures were a hit – revealing that the Psycho Rangers and some of the missing 6th Rangers from other series would be present was a fun surprise. Hopefully there will be follow up with the “??? SECRET” placards with an actual reveal unlike at the previous Power Morphicon. At that show we also received “??? SECRET” placards and they were never officially revealed – we first discovered that the Dino Thunder Rangers were included through an international website store, followed by MMPRToys video of Bandai packing up for Toy Fair. They were never announced by Bandai or by Saban Brands.

Getting the Legacy Zeonizer and the Legacy Golden Power Staff were huge hits. But fans still felt underwhelmed more than anything because there was no Megazord revealed for the Legacy line. We haven’t had a Legacy Megazord of any sort (unless you include the just-released black and gold Titanus) since October of 2016. Fans wanted to see a Legacy Shogun Megazord, or a Legacy Zeo Megazord, or whatever the next line of Legacy Megazord is going to be. The Legacy Golden Power staff was put on display following the panel, but it was placed next to the interactive portion of the booth – I personally had to wait until the show closed and ask permission to enter the booth to take photos because there’s no opportunity to do so while the show is open and fans are working the interactive booth (the blue-screen for the morphing interaction literally was next to the Golden Power Staff, so either you morph with my elbow in the screen or I just don’t take pictures). If I of all people couldn’t get to the staff then neither could fans of the toys. Bandai should remember that they’re a toy company first – something they obviously forgot this year.

Hasbro (a main competitor) in comparison had an enormous booth with every single brand represented. They had a panel for every single property and put out new toys every single day in their display cases. They had designers from each toy line present in their booth nearly every hour of every day to interact with fans, answer questions with fans, and even scheduled interviews with fans. They did not phone in this convention even though their own private convention is only a month and change away from now. Tamashii Nations, a part of Bandai Japan who has worked with Saban Brands and Bandai America in the past, set up their cases so their entire floor space was available (with tons of figures and new figures on display) and had representatives of both the US branch and the Japanese branch on hand to answer your questions. Individuals involved in Pacific Rim 2 showed up and caused a mad rush of attendees to the booth hoping for autographs, pictures, and free T-Shirts. Bandai treated their own booth as a carnival ride while every single one of their competitors showcased current, upcoming, and in development toys.

In recap –
PROS
– Power Rangers Legacy War stole the show both with their reveals and their “Green Ranger” battles throughout the weekend, kudos to Jason David Frank who did his best to create excitement
– Power Rangers licensees – Pop Culture Shock Toys and Weta Workshop in specific, wow’d fans
– Power Rangers Toys & Collectibles Power Hour was entertaining and should be a regular stay at SDCC
– Power Morphicon’s announcement generated quite the buzz

CONS
– Bandai, the official toy manufacturer of the Power Rangers franchise, was an embarrassment of a booth for a toy company who didn’t showcase any toys
– The overall presence, or lack thereof, of Power Rangers from Saban Brands
– Power Rangers Ninja Steel, or the extreme lack thereof
– Did you know David Yost (MMPR Blue Ranger), Walter Jones (MMPR Black Ranger), Andrew Gray (Megaforce/Super Megaforce Red Ranger), and Tracy Lynn Cruz (Turbo and In Space Yellow Ranger) were here at the show and doing various autographs? If you only follow the main Power Rangers social accounts then you probably didn’t know

In a year where Power Rangers had it’s first major motion picture released in 20 years, had it be one of the more successful home DVD sales this year, and the property itself was approaching it’s 25th Anniversary … Saban Brands and Bandai failed to show up, leaving the brand representation in the hands of its licensees. Once again, Power Rangers blends in to the mists of obscurity and it’s the fault of Saban Brands and Bandai. At the largest pop culture convention in the world, Power Rangers chose to stay home leaving people to wonder if anyone involved in Power Rangers cares about the brand as much as the fans do.

TokuChris is the webmaster and Editor-in-Chief of TokuNation.com. His views do not necessarily reflect the views of other staff members of TokuNation.com, the other sites on the network, or the moderation staff of the TokuNation.com forums. He has attended conventions across the United States since 2002 and has covered San Diego Comic Con for 4 of the last 5 years. Contact him privately at chris@gogopowerrangers.com

Check out these other reviews of the Power Rangers brand at SDCC 2017 from other fans who attended the show.