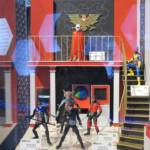 Tamashii World Tour’s next stop is Taipei China, photos from the event have revealed a plethora of S.H.Figuarts, based on characters from the evil Shocker organization.

Gathered together in a rather impressive display, we have two varieties of Shocker Grunts: both in Red and Black along with a bone pattern version and a Gel Shocker variant. What’s more is that these appear to be utilizing new bodies!

In addition to that, they are of course joined by the big bads themselves: Great Leader of Gel Shocker, and Ambassador Hell in his Garagaranda form.

Do note that for now none of these figures have been confirmed for release, as each figure only has a Display only tag next to their names. Stay tuned though, and we’ll provide more up to date info as it becomes available.