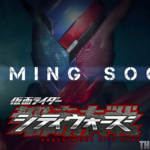 Judging by the trailer, Kamen Rider City Wars appears to be a city builder type game but with the unique addition of a turn based strategy RPG battle system. The game looks to feature every main titular Rider: from Ichigo all the way up to Build.

Still no word on the release date as of yet, but stay tuned and we’ll bring you more info as it becomes available. In the meantime, check out the trailer below: