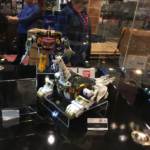 Super Mini-Pla King Brachion is one of the largest Super Mini-Pla sets to release and is motorized to act like the original, deluxe sized version. Currently, Super Mini-Pla Titanus is “Display Only”, and we will follow up with Bluefin Tamashii Nations to see if we can have any hint of an upcoming US release.

Special thanks to our friend @dekablue25 who is currently at New York Comic Con. Check out the original tweet below.