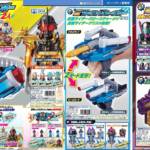 A plethora of images for Kamen Rider Build toys to be released in the second-quarter season have been posted online, revealing some fascinating details about the future adventures of this genius Rider!

*A new Driver has been revealed! The Scrush Driver is modeled after a trash compactor, and uses Jellies instead of the standard FullBottles.

*With a new Driver comes a new Rider! We have our first look at Kamen Rider Grease! This bronze and silver Rider uses the Robot ScrushJelly to henshin, and is armed with a new wrist-mounted weapon called the TwinBreaker.

*Not to be outdone, ANOTHER new Rider joins the fray- Kamen Rider Rogue! This purple & black Rider henshins using the CrocodileCrack FullBottle and is armed with the familiar-looking Nebula SteamGun! Kamen Rider Rogue will be assisted by 2 mysterious new creatures known as the Kaisers whose story is not yet revealed in these scans.

In order to fight off these enhanced opponents, Kamen Rider Build will receive an upgrade- a new device called the Hazard Trigger! This switch fits over the BuildDriver and unlocks the SUPER Best Match! These Super forms use the same FullBottle configurations but the Build body is now recolored black.

Finally, a handful of new Best Match forms are teased in these scans:

Definitely some exiting times ahead for Build! Stay tuned to TokuNation as we keep you up to date on all Kamen Rider news!