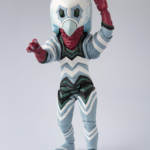 Bandai Tamashii Nations’ celebration of Ultraseven’s 50th anniversary continues into 2018 with the reveal of S.H. Figuarts Alien Guts! Recently revealed in the latest batch of magazine scans, the newest Tamashii Pick Up confirms that Guts will indeed be a retail release coming in March! Making their debut in the series’ popular two-part adventure “The Seven Assassination Plan” as well appearing more recently in the Ultraman Orb movie, Alien Guts will come packaged with a selection of alternate hands, paralysis ray effect part AND an Eye Slugger effect part for Ultraman himself!

S.H. Figuarts Alien Guts will release in March 2018 with a price of 6480 yen. Will you be getting this figure, or maybe picking up two just for that extra bit of accuracy? Check out the full selection of images and let us know after the jump!