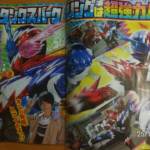 The newest round of magazine scans has been posted online, giving fans some information about the future adventures of Kamen Rider Build!

*The centerpiece this month is Kamen Rider Build RabbitTank Sparkling! Sento creates a special upgrade for his favorite BEST MATCH and will now be able to use all weapons at once.

*Another BEST MATCH is revealed as well- Kamen Rider Build OctopusLight! This configuration lets Build immobilize and blind his enemies during battle.

Finally, a pair of Exclusive BEST MATCH forms are teased-

Definitely some interesting new designs coming soon to this series! Stay tuned to TokuNation as we keep you up to date on all Kamen Rider Build reveals!