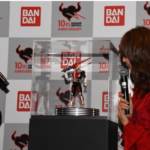 This year marks the 10th anniversary of Kamen Rider Den-O, and as you may recall; Bandai was hyping up a big announcement for the series at the next Tamashii Nations event, and while it might not be the highly speculated S.H.Figuarts Shinchokou Seihou, what we do have is a new currently unnamed articulated action figure line for Kamen Rider.

At the moment, not much about this new line is known other than the fact that they appear larger than Figuarts, in addition to having some sort of transformation and light up gimmick.