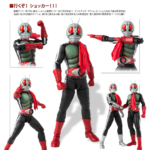 Kamen Rider 2 was teased for a May release window as a general mass retail release a little while ago, the date was confirmed by that very web page. No word was given on price, but considering that the figure shares the same body as Kamen Rider 1 we can expect a similar 6,480 yen price point. Stay tuned, and we’ll bring you more up to date info along with any more pictures that get released.