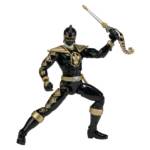 Thanks to GrnRngr.com’s Facebook page we have press photos for the upcoming 5th series of the Power Rangers Legacy 6.5″ figures. This series has already started bleeding in to stores with the Zeo Red Ranger showing up in Series 4 case assortment refreshes. The wave is as follows:

We know that at least one case assortment that will be hitting stores will contain only the male figures. The female figures have yet to be seen in package, in production, or anywhere really. We’re still awaiting an update on the Zeo Yellow Ranger, who is part of the Series 4 figures and yet has not been released.

The press photos do not appear accurate to what is going to be released. Many of the “shiny gold” parts of the figures end up being a dull orange color instead. This change first started with the Series 4 figures and continues int he Series 5 figures. Hopefully we will have some answers at Toy Fair next month as to why.