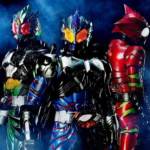 A new teaser trailer for the upcoming Kamen Rider Amazons special movie has been posted online!

This film was first hinted at during the theatrical release of Kamen Rider Heisei Generations FINAL Exact details are unconfirmed at time of writing, but the project is tentatively known as Kamen Rider Amazons: Final Arc.

Kamen Rider Amazons will be coming to theaters in Spring 2018! Stay tuned to TokuNation for further details!