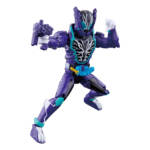 Every year there is what fans call the “affordable” line of figures for Kamen Rider. This line is also called the “gimimck line”. This year, however, hasn’t been quite affordable although the gimmick is still pretty great. That’s where BCR11 Kamen Rider Rogue enters the scene.