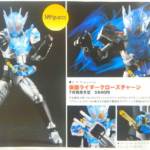 Also among the latest batch of Figure Oh magazine scans is the newly revealed S.H. Figuarts Kamen Rider Cross-Z Charge! While there still isn’t 100% confirmation whether this figure will be a general retail release or a Tamashii web exclusive, the absence of the webshop logo on the scans seems to point towards it being a retail release.

What do know however is that Ryuga Banjou’s second form will be released in July 2018, for the price of 5940 yen. The scans also confirm that it will include the Twin Breaker weapon.

Check out the full-sized scan after the jump and let us know whether you’re planning to pick this figure up! We’ll bring you more information as it comes.