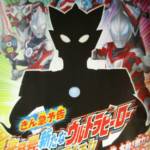 A new challenger has arrived!

Tsuburaya Productions’ begun to tease the next Ultraman series following Ultraman Geed, and while our new hero currently remains nameless we have our first silhouetted look at this new hero thanks to a magazine that have been making the rounds online.

No name for this Ultraman has been confirmed as of yet, but three names have been trademarked: Ultraman Lube, Ultraman Rosso, and Ultraman Bull.  Ultraman Bright has also been thrown around, it’s also possible that Tsuburaya could be going with three main Ultramen for the next show, but nothing has been 100% confirmed as of this writing.

Stay tuned, and we’ll bring you more info as it breaks.