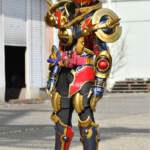 Toei has officially uploaded the first full image of the next Kamen Rider to join the adventure that is Kamen Rider Build!

While fans have speculated as to the identity of this Rider since toy listings first surfaced, we will leave any further details OFF the frontpage out of respect for the fans who wish to enjoy Build’s saga unspoiled.

Kamen Rider Evol will debut in the next episode of Kamen Rider Build! Stay tuned to TokuNation for further developments on this remarkable Rider series!