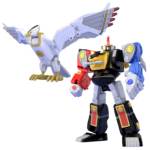 Recently, Premium Bandai and Bandai Japan announced the next Super Mini-Pla figures to see release in Japan (the Muteki Shogun, Kakure Daishogun, and Tsubasamaru). Fans speculated whether or not they would see a release in the United States – and today Bluefin Tamashii Nations announced that the Ninja Megazord and Falconzord will see a US release!

The retail price tag for this set will be $99 and will release this November. This is great because the Japanese version, Kakure Daishogun and Tsubasamaru, were Premium Bandai exclusives and were demanding a pretty penny for import.

Super Mini-Pla are model kits that you put together. The end result is a mecha that is more articulated than the full size toy. The closest way to describe them is think Gundam model kits but of your favorite Power Rangers and Super Sentai mechs.