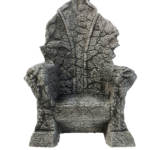 As we head into the home stretch for the SHATTERED GRID event from Boom! Studios, fans have suddenly received a quick glimpse at the final villain for this exciting adventure!

The evil Lord Drakkon has obtained more power than any villain the Power Rangers have ever faced before, and at last has taken on his ultimate form.

This new preview for Issue #30 was leaked early- the comic in question will be released on August 15 2018!

We are aware that the reveal of Lord Drakkon constitutes a very large part of the final SHATTERED GRID arc- and out of respect for fans who wish to go into the event unspoiled, TokuNation will NOT be re-posting the image in question. Instead, we invite all fans to join in our Shattered Grid Issue #30 Preview Discussion Thread to share their thoughts. PLEASE TAG ALL SPOILERS OUT OF CONSIDERATION FOR YOUR FELLOW FANS!