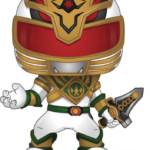 ToyWiz has revealed the next Power Rangers character to make the jump to the fan-favorite collectible series Funko POP!

The infamous BOOM! Studios comic book villain LORD DRAKKON will be recreated in miniature plastic glory! This figure has a limited production run of 30,000 pieces and is tentatively scheduled for release in January 2019.

Lord Drakkon’s Funko figure is now OPEN FOR PREORDER at the relatively affordable pricetag of $12.99 USD!