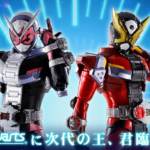 Bandai Tamashii has revealed the next entries in the fan-favorite SH Figuarts series!

The newest Kamen Rider heroes- Kamen Rider Zi-O & Kamen Rider Geiz will be joining the lineup of Rider Figuarts, and both have been recreated in exquisite detail.

Stay tuned to TokuNation as we keep you up to date on all SH Figuarts reveals!