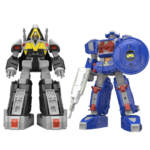 Bluefin Brands has officially announced the release of the Power Rangers In Space Super Mini-Pla Astro Megazord and Delta Megazord in the United States. These items were originally announced via Bandai Japan with pre-orders already open – this marks the 6th and 7th release of Super Mini-Pla items under the Power Rangers brand here in the United States (following Mighty Morphin Megazord, Dragonzord, Titanus, Ninja Megazord with Falconzord, and Shogun Megazord).

Super Mini-Pla are model kids, much like Gundam model kits, where you build these fully functioning, transforming figures from pieces on pegs. You can then either apply the stickers that come with the items or paint them yourself – it is up to you! What makes them special is how close they resemble their in-show models and the fact that they are fully transformable and fully posable.

These are slated to release on 03/15/19 for a grand total of $42 for the pair. Stay tuned for pre-orders to go up at your favorite retailers.