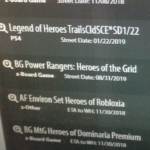 During Power Morphicon fans of the Power Rangers were treated to the Kickstarter campaign of Power Rangers Heroes of the Grid, an incredibly in depth and customizable board game created by Renegade Game Studios under license from Hasbro. The game was incredibly successful on Kickstarter raising over $700,000 when all was said and done. Fans who have backed the Kickstarter will get their packages sometime in July of 2019.

Thanks to @TokuReviews on Twitter, we can now share that video game and collectibles store Game Stop has a street date in their system for the base game – August 31st, 2019! If you didn’t or couldn’t support Heroes of the Grid via the Kickstarter you now have a timeframe of when you might be able to expect the game in stores.