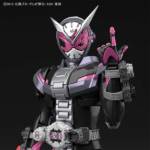 In case you were among those that missed out on the S.H.Figuarts version of these characters, we may have an alternative for you with FigureRise Standard Kamen Rider Zi-O And Kamen Rider Geiz having just been revealed. Rejoice! For the heir of all Riders is here in model kit form.

Both Riders will include alternate hand assortments along with their personal sidearms: Geiz with his Zikan Zax and Zi-O Zikan Grade, with the gun and bow modes being included for both weapons though it is unknown if the weapons themselves will be able to transform or not.

FigureRise Standard Kamen Rider Zi-O and Kamen Rider Geiz are expected to come out March 2019. No pricing was announced at the time of this writing, though if last year’s Kamen Rider Build kit was anything to by, we can expect a price point in the 3,240 yen range.