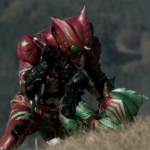 In a new feature for Tokunation, we’re teaming up with review blog My Shiny Toy Robots to feature and cross-promote the various tokusatsu series and film reviews featured on the site. In the first of what will hopefully be many posts, we’re discussing the finale to Kamen Rider Amazons story – Kamen Rider Amazons the Movie: The Last Judgement!

Released earlier this year in the place of the annual Super Hero Taisen spring movie, The Last Judgement chronicles the final showdown between Haruka Misuzawa (Kamen Rider Amazon Omega) and Jin Takayama (Kamen Rider Alpha Alpha) as Haruka stumbles upon a new scheme to use Amazons to solve the world’s growing food crisis.

Be sure to check out the review and let us know your thoughts about the film in the discussion thread linked, as well as future reviews as they continue into the new year!