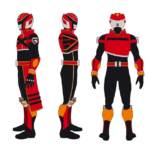 Power Rangers S.P.D is widely regarded as one of the best ones out of the Disney Era of Power Rangers and it’s also one of the shows that’s always being expanded upon even after the show was ended. The official Power Rangers Twitter account dropped a surprise bombshell on us earlier today with a look at an all-new S.P.D B-Squad via a holiday greeting card that can now be purchased in stores with artwork courtesy of @shadowpiper via Twitter.  Do note that the image attached to this article may contain spoilers for Power Rangers: Soul of the Dragon. So if you haven’t read it yet, please continue on at your own risk!

In the Operation Over Drive episode Once a Ranger, Bridge mentioned that Sky was promoted to head of SPD Earth division while he received a promotion to Red Ranger. The armor Bridge wears is a reference to the Fire Squad armor donned by Akazan Ban Ban in the DekaRanger 10 Years After movie.

Speaking of DekaRanger, there have been many speculations as to what Sky’s version of the Shadow Ranger would look like and we now finally have our first answer in the form of the Deka Ranger.

Lina could possibly be referring to Lina Song, a character played by Malika Lim in the Power Rangers: HyperForce tabletop RPG. And finally, J.J. Oliver is the son of Tommy Oliver, we can’t go into him too much as doing so would spoil Soul of the Dragon for those that have yet to read it.

As of this writing, we aren’t certain if this image will lead into some sort of sequel or continuation for Power Rangers: S.P.D though with the current run of comics from Boom! Studios, anything is possible. In the meantime, be sure to stay tuned to Tokunation and we’ll immediately update you as more info becomes available.