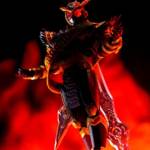 Bandai Japan has put up a short teaser for a major upcoming release in 2019- the Evil Rider known as Ohma Zi-O!

This sinister figure is the Demon King of 2068 with remarkable time-controlling powers. Ohma Zi-O’s full story has not yet been told at time of writing but his fate is somehow linked to the King Of Time, Kamen Rider Zi-O.

Sadly, no release details for Ohma Zi-O have been announced just yet. So stay tuned to TokuNation for further details on all SH Figuarts Kamen Rider releases!