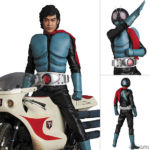 It’s time to travel back to 1971 and Medicom has your ticket back to the past with their take on a Kamen Rider 1, pre-orders have just opened up for the RAH Genesis Kamen Rider 1 & Cyclone Ultimate Edition Set!

As the name implies, this massive set will include both Kamen Rider 1 and his trusty motorcycle: The Cyclone. An assortment of optional hands will be included, along with an alternate head depicting actor Hiroshi Fujioka in his iconic role as Takeshi Hongo. In addition, both belt and motorcycle will have a built-in LED gimmick.

All of this can be yours for a relatively steep cost of 56,650 yen. (Approximately 517.49 USD as of this writing) you can look forward to this figure sometime in September 2019. In the meantime, head on over to AmiAmi and reserve yours today.