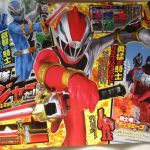 The first proper round of magazine scans for the 43rd Super Sentai Series has finally been released, giving us the best look yet at Kishiryu Sentai RyuSoulger!

For the first time we have learned some information about the Ryusoulgers themselves! The heroes are known as Knights in-universe and each one has been given a brief character bio:

*Ryusoul Red is The Brave Knight and is described as “a hot-blooded Leader.”
*Ryusoul Blue is The Wise Knight who thinks twice before making a single move.
*Ryusoul Pink is The Robust Knight and the strongest member of the team.
*Ryusoul Green is The Gale Knight who uses speedy attacks to win battles.
*Ryusoul Black is The Majestic Knight referred to as having splendid techniques.

While the RyuSoulgers can use RyuSouls to power their weapons and attacks, they will confront enemies using a corrupted form of this ability called MinuSouls. In these scans, the RyuSoulgers are shown fighting off a squadron of enemy soldiers- known as the Dorun.

The RyuSoulgers are scheduled to make their first appearance in the Super Sentai Strongest Battle event, and the series itself is currently scheduled to begin on March 17 2019! Stay tuned to TokuNation as we keep you up to date on all RyuSoulger reveals!