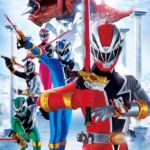 Following the press conference that announced the cast members for the 43rd Super Sentai series Kishiryu Sentai RyuSoulger, a new preview has been released giving us our first proper look at this team in action!

This stage performance gives us our first proper look at the RyuSoulger cast in action, along with some brief teases of the series’ henshin sequences and music (including the ending-dance).

The songs in RyuSoulger will be provided by Super Sentai veterans:

*The opening theme, Kishiryu Sentai RyuSoulger will be performed by singer Tomohiro Hatano who previously performed the opening to Uchu Sentai KyuRanger.