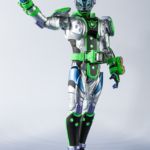 It wasn’t that long ago that Bandai unveiled S.H.Figuarts Kamen Rider Woz in all of his glory, and that he’d be released at mass retail. It hasn’t even been a day yet, and already Bandai’s Tamashii pick up page was updated with new photos of this future Rider.

Woz’s signature Zikan Despear weapon will be included, in the Figureoh scan, it showed that it will include parts to create its other modes. It doesn’t appear that his Ride Watches are detailed, a trend which sadly started with Zi-O and Geiz and themselves.