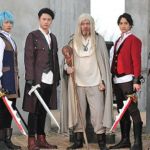 These are the Master Rangers– the predecessors of the current team who have retired from active duty & begun training the next generation of heroes. The Masters are armed with basic silver swords rather than the traditional RyuSoulKen weapons wielded by the RyuSoulgers.

Each Master is played by a tokusatsu veteran:

Last but certainly not least is the mysterious Elder of the RyuSoul Tribe. This figure is the overseer of all RyuSoulgers, past and present. The Elder will be played by Jiro Dan, best known for the role of Ultraman Jack.

Kishiryu Sentai RyuSoulger is scheduled to begin on March 17 2019! Be sure to join in our Ongoing RyuSoulger Discussion Thread to share your thoughts & fears about this remarkable new series!