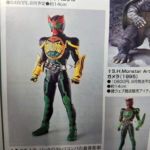 After the announcement of the long-awaited S.H.Figuarts Shinkocchou Seihou Kamen Rider Kiva, fans and collectors alike wondered where the line would go from here and the next release was recently revealed by our friends at Bandai to be none other than Kamen Rider OOO himself!

S.H.Figuarts Shinkocchou Seihou Kamen Rider OOO TaToBa Combo was recently revealed in the latest round of Figureoh magazine. No option parts were shown, but we do have a price and release date: 6480 yen in August. In addition to TaToBa combo, we’ll also be getting our first Combo change form in the form of TakaKiriBa, though no release info was revealed for him at the time of this writing.