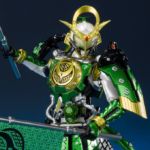 Last time we looked at this beautiful melon, we didn’t know if Bandai had plans to release it out to the public or not but it seems like public reaction’s been positive enough that Bandai will be putting some quantity of them into production.

New photos have emerged thanks once again to some data mining from Tokullector. At this time we know that it will be released in December and likely will be a Tamashii Web Shop limited item. Stay tuned, and we’ll be sure to provide you with an update as it’s made available.