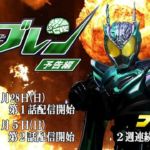 Toei has released a FULL TRAILER for the new special to be released on the Tokusatsu Fan Club streaming service- Drive Saga: Kamen Rider Brain!

In addition to Shota Matsushima taking the title role, a number of characters from Kamen Rider Drive will be returning:

*Tomoya Warabino returns in the role of Heart.
*Fumika Baba reprises the part of Medic.
*Chris Peppler will once again portray the character of Krim Steinbelt.

Drive alumni will be returning BEHIND the camera as well; the special will be written by series’ head writer Riku Sanjo while Kyohei Yamaguchi once again takes the directors’ chair.

This two-part special is currently scheduled to begin on April 28 2019– which means Kamen Rider Brain will be the LAST Kamen Rider introduced in the Heisei Era.

Last but CERTAINLY not least, it seems Kamen Rider Brain may be receiving an action figure in SH Figuarts! No official prototype has been shown yet but fan response to this special may improve Brain’s chance of release.