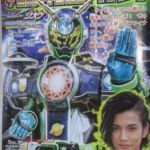 The latest round of magazine scans has been posted online, offering fans a few details about the next adventures of Kamen Rider Zi-O!

In the near future, an alien meteorite crashes into Earth- containing a powerful new foe, Kamen Rider Ginga! This extraterrestrial Kamen Rider has set out to conquer the universe with his unfathomable powers- Ginga is even stronger than Zi-O’s Trinity Form!

But the alien threat is only one of the challenges facing Team Zi-O. A mysterious demon is at loose- the next Another Rider, AnotherHibiki! Sougo must learn how to fight such a creature with the help of the Oni Riders.

Definitely some exiting times ahead for Kamen Rider Zi-O! Stay tuned to TokuNation as we keep you up to date on all Kamen Rider reveals!