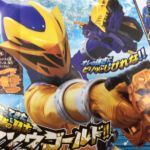 The latest round of magazine scans has also given fans some teasers for the future adventures of the 43rd Super Sentai series, Kishiryu Sentai RyuSoulger!

Taking center stage this month is the Knight of Destiny, RyuSoul Gold! Hailing from a long-lost RyuSoul Tribe hidden in the seas, the warrior Kanaro comes armed with two unique weapons- the MosaChanger gun and the MosaBlade saber. RyuSoul Gold has already mastered a powerful RyuSoul known as the BiriBiri Soul which activates powerful electric armor in combat.

RyuSoul Gold has two purposes in joining the surface world: to repel the Druidon Tribe attacks on Earth, and to find a bride! Kanaro is aided in both tasks by his younger sister, Oto.

Joining RyuSoul Gold in combat is his signature Kishiryu– the massive MosaRex! The only aquatic Kishiryu yet revealed, MosaRex is described as Kanaro’s Master who taught the young RyuSoulger everything he knew about combat. MosaRex has a unique Mecha configuration- transforming into KishiRyu Neptune!

Finally, another villain will be joining the series- the cursed knight Gaisorg! This legendary warrior first appeared in the Super Sentai Strongest Battle mini-series, and now at last his hunt for the RyuSoulgers takes center stage.

Definitely some exciting times ahead for RyuSoulger fans! Stay tuned to TokuNation as we keep you up to date on all Super Sentai news!