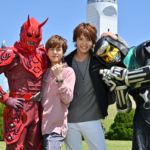 The next visit on schedule for the King of Time is to the era of Toei’s last time-traveling hero, Kamen Rider Den-O!

But that’s not all! The four star Imagin from the World of Den-O will all be returning for this story arc-

The time worlds collide in the next episode of Kamen Rider Zi-O, currently scheduled to air June 9 2019! Feel free to join in our Ongoing Zi-O Discussion Thread to share your thoughts on this latest adventure!