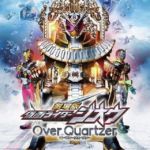 Titled Over Quartzer this film features Kamen Rider Zi-O facing off against a new group of opponents known as the Wardens of Time– set out to determine once and for all who is the one true King of Time.

The movie poster has revealed a brand-new form for Kamen Rider Zi-O! While this new form does resemble the series’ overall villain Oma Zi-O, the details are more ornate than any previous Time Rider.

Kamen Rider Zi-O: Over Quartzer is currently scheduled for release on July 26 2019! Feel free to join in our Ongoing Kamen Rider Zi-O Discussion Thread to share your thoughts and fears on this theatrical adventure!