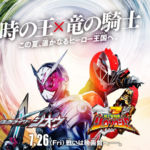 Toei has released a pair of trailers for the upcoming Super Sentai and Kamen Rider summer double-feature!

*First up, the members of Kishiryu Sentai RyuSoulger will be sent back 65 million years to explore the origins of the RyuSoul Tribe in Time Slip! Dinosaur Panic!

*Next, Kamen Rider Zi-O will face off against the Wizards of Time who seek to prevent some Kamen Riders from ever being born in Over Quartzer!

Both films are currently scheduled for release on July 26 2019. Stay tuned to TokuNation for more Super Sentai & Kamen Rider reveals!