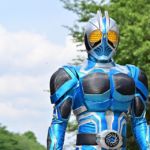 The rumors were true, and a surprise guest will be making a splash onto next week’s episode of Kamen Rider Zi-O: and it’s none other than the first future Rider himself: Kamen Rider Aqua!

Michael Minato or Kamen Rider Aqua made his first debut in the Kamen Rider X Kamen Rider Fourze & OOO Movie War Mega Max film. He is a young hero from the year 2050. However, he becomes possessed by a Greed called Posiden and becomes the villainous Kamen Rider Posiden.

Screenshots of the episode can be viewed on Toei’s official Kamen Rider web page, but as there might be potential spoilers do click on at your own risk!