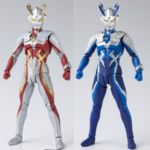 Yet another exclusive item’s been confirmed for this year’s Tamashii Nation event joining alongside Seihou Diend and Build RabbitDragon whom we had a look at earlier. Now joining the pair is a two-pack featuring S.H.Figuarts Ultraman Zero Strong Corona and Luna Miracle forms.

The two forms were previously done in the now-defunct Ultra-Act line, but they’re recreated here for S.H.Figuarts.

This Two-Pack will retail for 12,100 yen at the event. Accessories include the Ultra Zero Lance and a myriad of optional expressive hands.