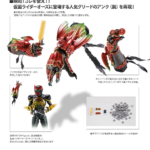 Kamen Rider OOO just made his grand debut into the Shinkocchu Seihou line and upon his release, rumors began to spread about a certain red-feathered partner has also been in development. That rumor’s now taken shape in the form of S.H.Figuarts Shinocchu Seihou Ankh.

Of course, this, unfortunately, isn’t Anhk while he’s in the possession of a human body, and while it might be just an arm we can see that he’ll come with a ton of accessories: including the usual assortment of expressive hands, an Ice Candy, a miniature iPhone, a pile of Cell Medals, and finally the Core Medals needed for TaJaDol and TaToBa combos.

All of this can be yours for 3960 yen and will ship out in January 2020. This does not appear to be a P-Bandai exclusive, but we’ll let you know if that changes.