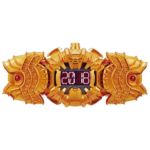 This weekend will mark the final episode of Kamen Rider Zi-O. And while it might be wrapping up, Bandai doesn’t seem to be stopping the merch train any time soon. A new magazine scan’s been making the rounds online revealing a roleplay toy for the Belt of the Demon King himself: the DX Oma Zi-O Driver!

The DX Oma Zi-O Driver will be released in January 2020 retailing for 8250 yen seemingly as a P-Bandai release according to the Twitter user @_Erasu. We’ll be sure to notify you the minute the pre-order link goes live so stay tuned for future updates.

The Pre-Order link for the DX Oma Zi-O Driver is now live!