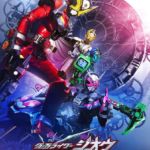 A teaser poster has been released for an upcoming V-Cinema project starring the Time Riders of Kamen Rider Zi-O!

Titled NEXT TIME: Geiz Majesty this film apparently stars Kamen Rider Geiz and will likely take place after the conclusion of the series. More information is expected to be release after this weekends’ final Zi-O episode.