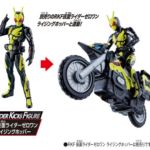 Kamen Rider Zero-One’s making his grand debut today ushering at the beginning of the Reiwa-Era Kamen Riders. To tie in with such a momentous occasion, a brand new batch of images for the latest roleplay toys coming out in Early October/Late September have just been released. Those products are as follows:

Looking forward to these toys releases? What did you think of the first episode? Let us know what you thought by hitting the jump!